Life these past few weeks while stuck in port have been such a bore! Oh sure, the nightly drunken parties were charming at first, but after awhile it grows tired on my nerves. How I long for the creaking of waterborne wood and the stinging smell of antiseptic as the crew and I fight off scurvy. 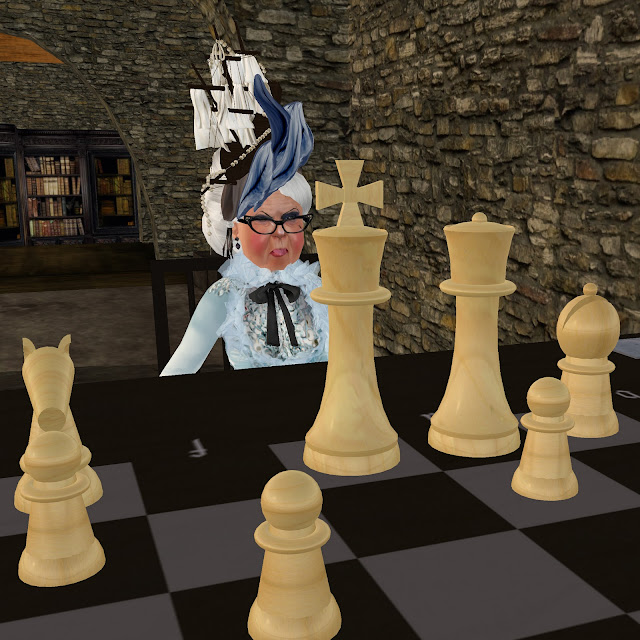 I'm not the only one starved for adventure. My crew lazes about, drinking while awake until they just pass out again. Morning maneuvers are becoming more difficult, as most are hung over and can't tell hull from rudder. At this rate, we'll be a sad example of her majesty's fleet when next we take to open water. 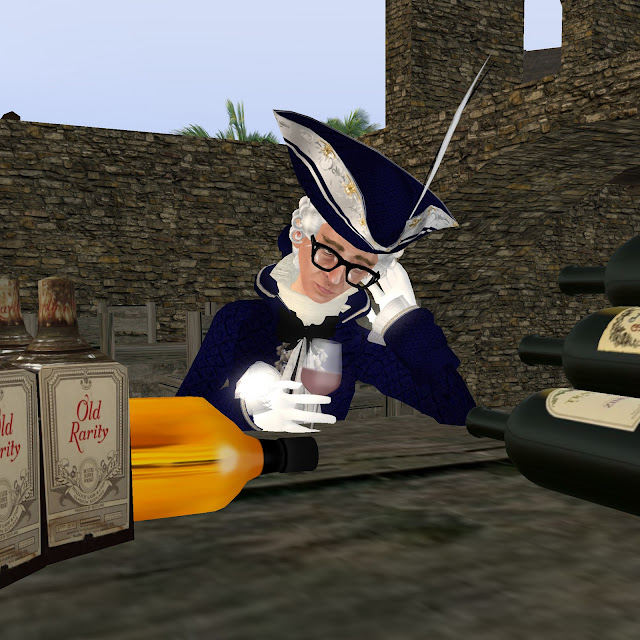 An urgent note from the Admiral arrived this morning. An unnamed threat has been attacking supply ships and must be stopped! Countless crimes against humanity and other lifeforms have been committed. Only wreckage and ghastly clues remain from the scenes, and no one is able to identify the criminal responsible. I feel a tugging deep in my mind. Could it be....? No, perhaps it is just too much rum. 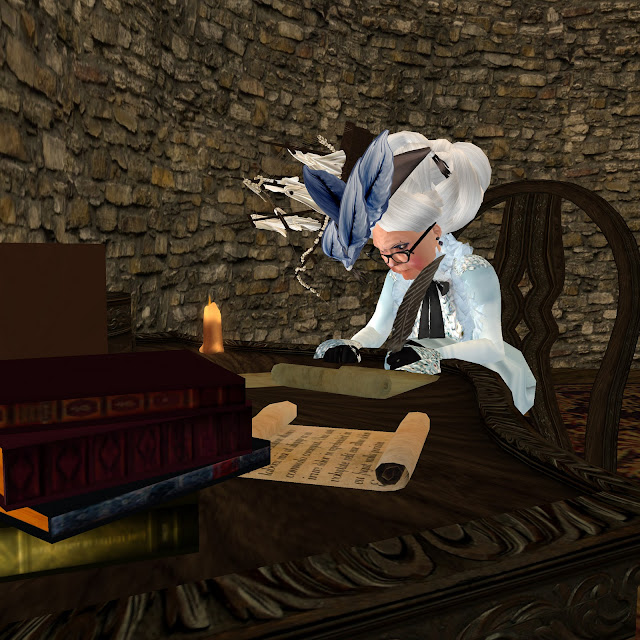 The sound of my alarm greeted the sunset and immediately my crew began scrambling. My lovely ship, the H.M.S. Samantha Davis, Jr.Jr. seemed eager to stretch her legs. Before we even had a chance to unfurl her sails, she began inching out into the harbor. 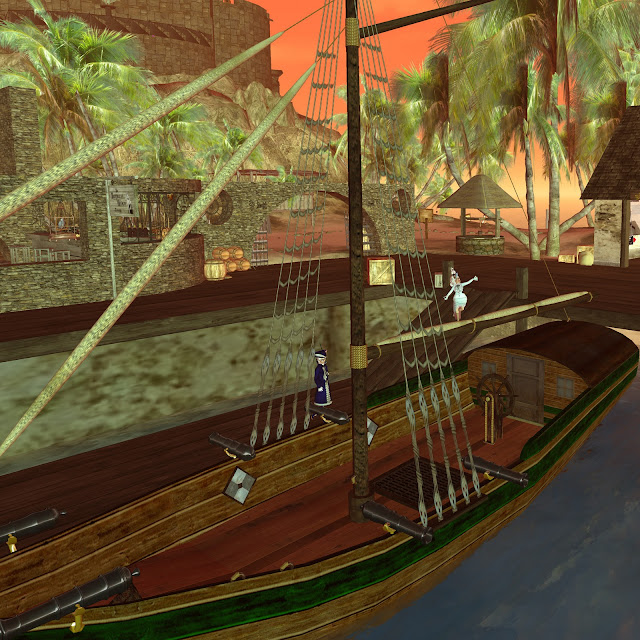 My first matey Wilmur scrambled up to the crow's nest to have a gander at the crew's progress. He took a look behind him and gasped, reaching for his inhaler. What sight befell his veteran eyes to cause such a response? 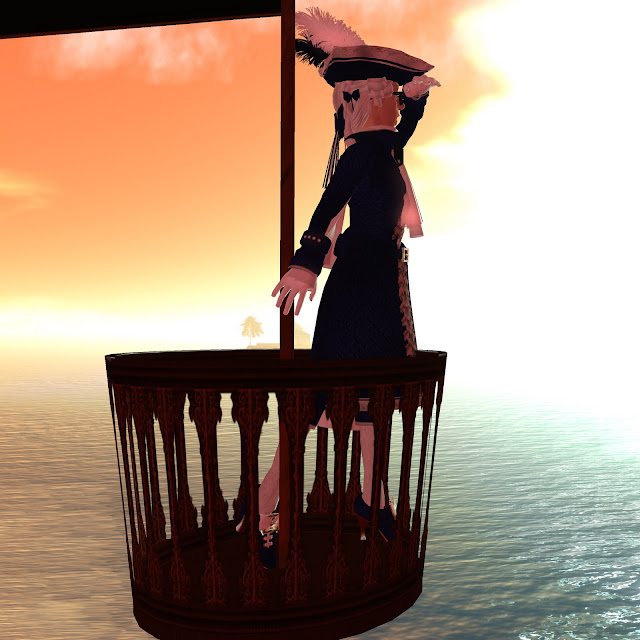 My arch nemesis, Octy von Yazi on her mighty ship, the Corksoaker!

So, it really wasn't the spirits! As soon as I read the Admiral's description of the heinous atrocities, I knew it could be none other. She has a reputation of the most despicable kind - a heartless, merciless, kitten killer of a pirate!

What a coincidence that she would come into port just as I was leaving to search her down. Or was it? 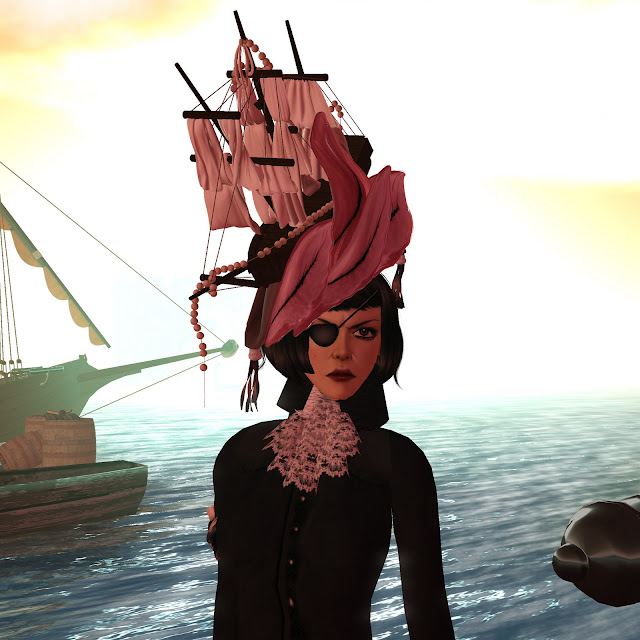 A blood-curdling shriek arose from her throat as she saw the Samantha Davis, Jr. Jr. She jumped on the side of her ship and yelled, "Arrrr! So finally we meet again, Captain Edith O'Gelby! Finally I will have my revenge on ye and this port shall be smeared with the remains of ye and yer crew!" 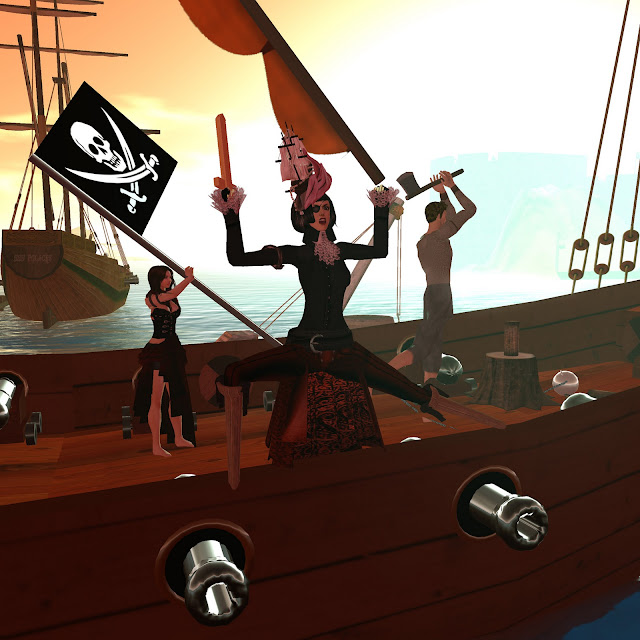 Her ship pulled alongside mine with such haste, we barely had time to arm ourselves before her miscreant crew had climbed aboard and attacked. Wilmur had his hands full with von Yazi's ruthless first mate, Killer Kath McGinnis - a heathen so corrupt and guileless, anyone who came up with a better nickname for her perished under her blade before it could be uttered. 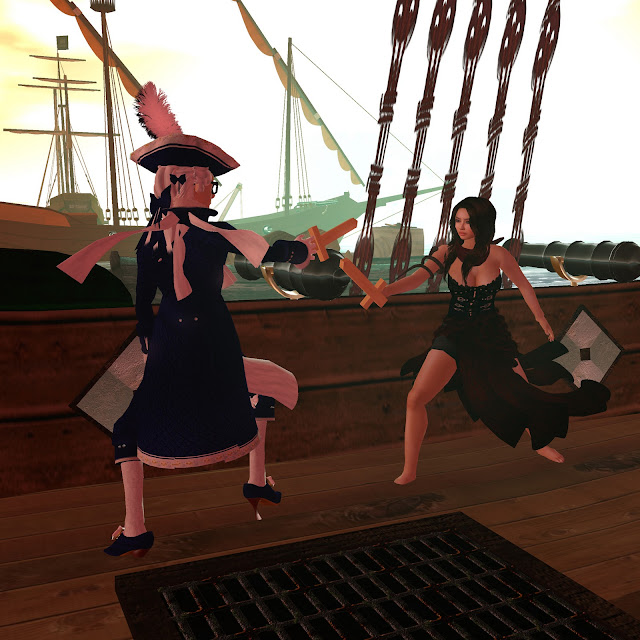 I, however, didn't waste time on the small fish. As every hero does, I pushed and slashed my way through the hoi polloi until I got to von Yazi herself. With a hellish shriek, I engaged her. We fought in every crawlspace and hold of the ship, as control of the battle was passed back and forth like a holy eternal tug of war. 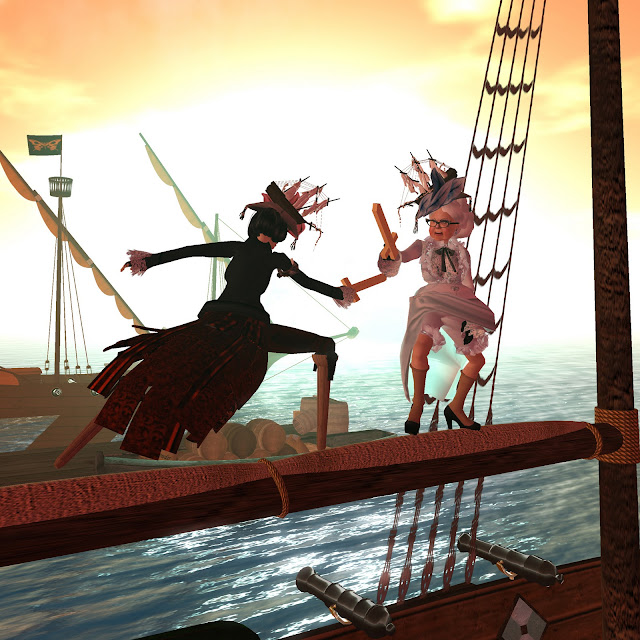 Finally, on the high topmast, we were far enough away from the commotion below to exchange banter.

"Dandy legs you have there, Octy."

"The finest mahogany, thank you. I made them from the chair of the last captain I slaughtered."

"I have to admit, they do give you intimidation points. One would think you'd thank me for taking both your legs!"

Fire flashed in her eyes and she lunged. I wobbled, almost falling, and I cried down to my first matey below: "Wilmur! For the love of everything holy, release the weapon!" 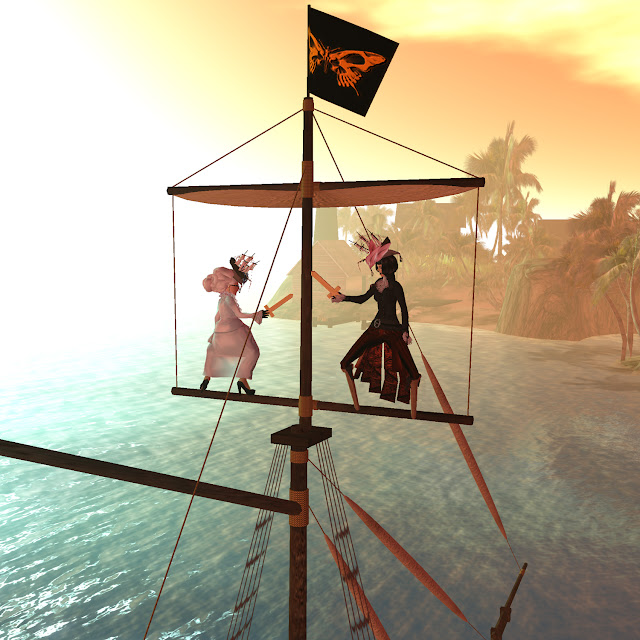 "Aye-aye, captain! The weapon is released."

I turned to my rival and gritted my teeth. "Now, Octy von Yazi, we shall see how well those wooden legs can serve me as well as you! Behold! Her Royal Majesty's beaver!" 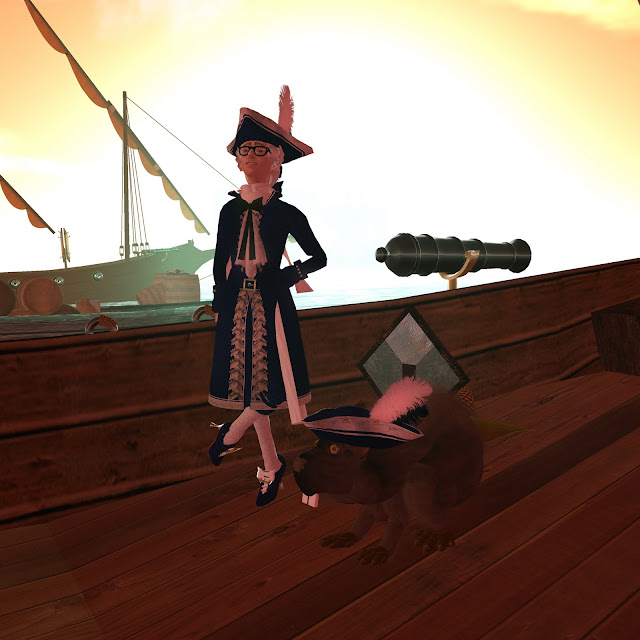 With a yalp and a screech, the desperate pirate grabbed a rope and swung down to the deck, leaping into an escaping rowboat of her comrades. As her tuck-tail cohorts made rude gestures and yelled threats and insults, Octy von Yazi climbed to the bow and crowed back, "We will meet again, Captain Edith O'Gelby, and perhaps then no beaver will help you!" 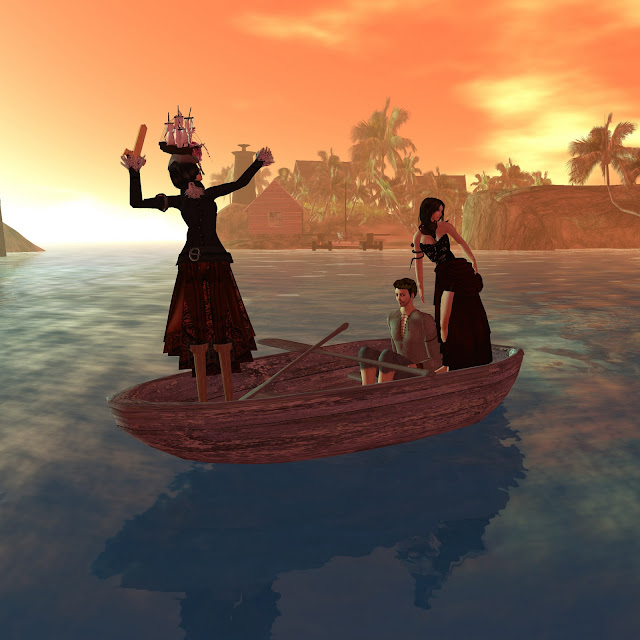 Oh, how the crew rejoiced! Cheers and hoorays quickly drowned out the jeers from our retreating foes. How convenient, everyone decided, that we were still in port where there was a healthy supply of drink with which to celebrate our victory with!

As the crew started to disembark, I called them back sharply, adjusting my hat with resolve. "We may have won the day, lads, but not the war! Now get back on this tub and get her sea worthy! We have a pirate to catch!" 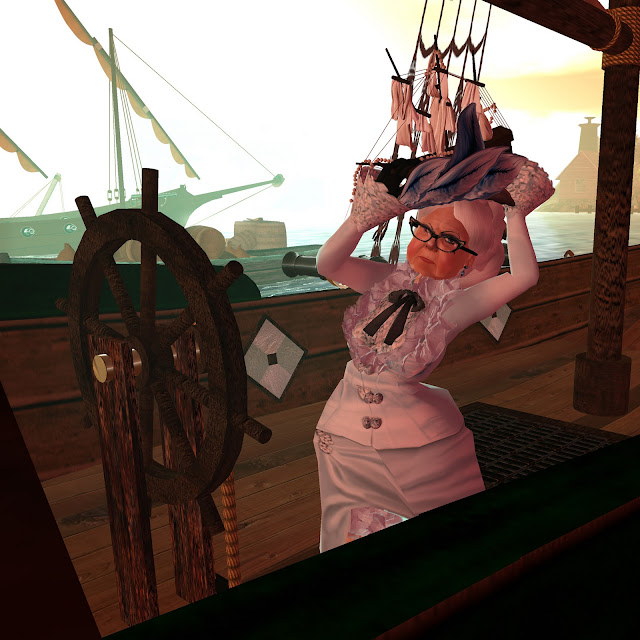 ~~~~~
(To keep my already long story posts from being painfully longer, credit details are in the comment section below, or you can find credits to specific pictures on my Flickr Page. A directory of SLurls can be found here.)
Posted by Dame Edith Ogleby at 6:19 PM