There is a beginning to everything... (Lost Dog, Part 1)

Good evening, dear - do come in! Would you care for some tea or coffee? I do have something stronger, if you prefer, and I'd never tell a soul!


Oh, darling, you're so polite to say that, but indeed, I am not the vision of beauty that you suggest. I know I must look a fright! I've had such an eventful night. Oh, my nerves! Have a seat and I'll tell you all about it.
Everything was going so well. I was out shopping with my dear Sammy Davis, Jr. Jr., and all of a sudden the sun was swallowed by the sky and it began to pour! Luckily, Sammy and I were just outside a quaint cafe when the deluge began and we quickly slipped inside. 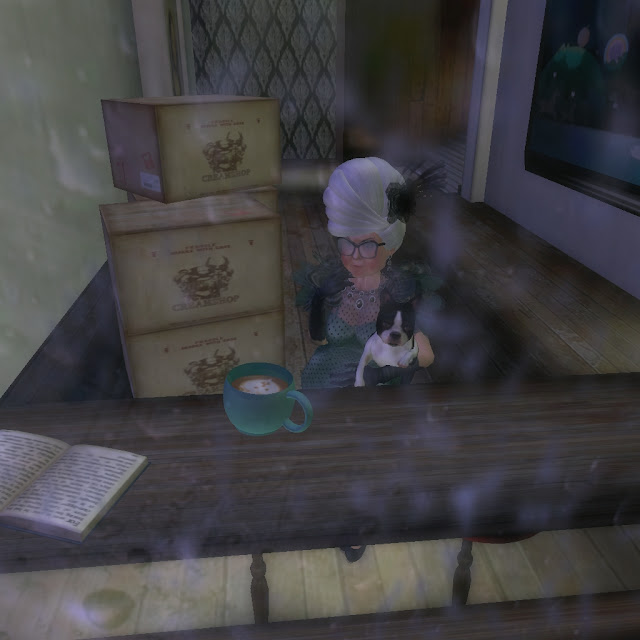 While it was a bit more plebeian than I am used to, it was mostly dry and the coffee smelled wonderful. So, I sidled up to the counter and ordered an Austrian goat milk half-caf-half-decaf cappuccino - extra hot - with a dash of Sri Lankan cinnamon and half tablespoon of caramel-latte-frappe-mocha. That must have been the daily special because my waitress poured it right from the coffee pot into the cup and gave it to me on the spot!

It was so cozy there with my nice coffee, the sound of the rain beating on the glass, and the occasional swish of a taxi driving by, I believe I must have dozed off (as ladies of my seasoned years are apt to do now and then). I woke with a start and was just about to take another sip of drink, when it hit me! I looked to my left, and then to my right, and found t'was true what I had most feared: 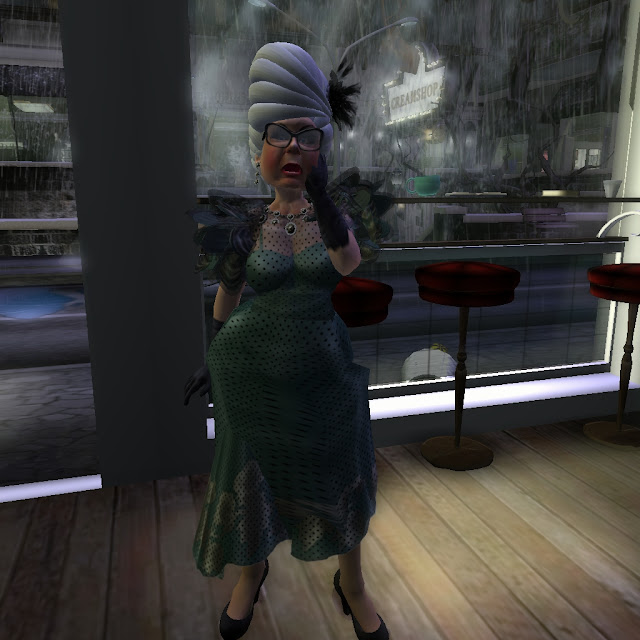 My dear Sammy Davis Jr. Jr. was missing! A quick search of the cafe showed he was nowhere to be found there. So, with only the briefest of hesitations, I grabbed a newspaper and headed out into the tempest to find my beloved dog. 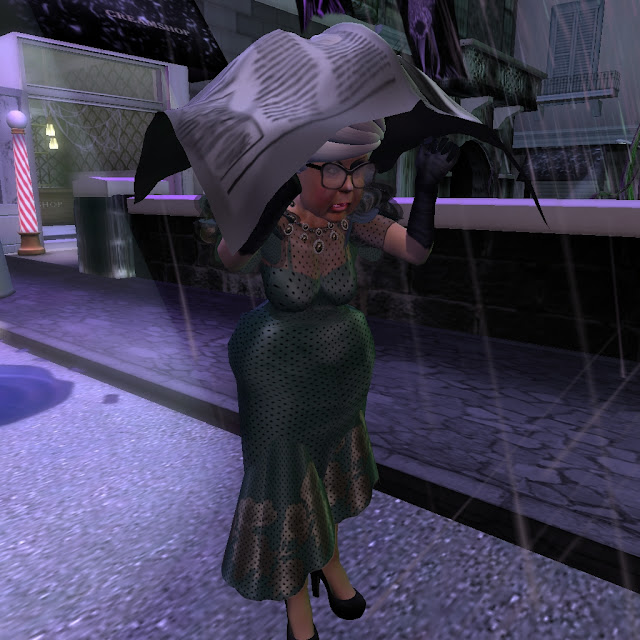 Up and down the sidewalk I went, calling out, "Sammy, darling! Where are you?" I so hoped to hear his familiar "Yark!" or see his little body come running, wiggling at the thrilling joke he had pulled on his poor mother. My emotions pendulated between anger and fear; I was desperate! A lightning bolt crackled as it hit close by and every hair stood on end. (No, dear, every natural hair. My wig is of good quality, and has been well trained.) I was so startled that I crumpled my newspaper, so I stepped into the doorway of a nearby shop to straighten it out. 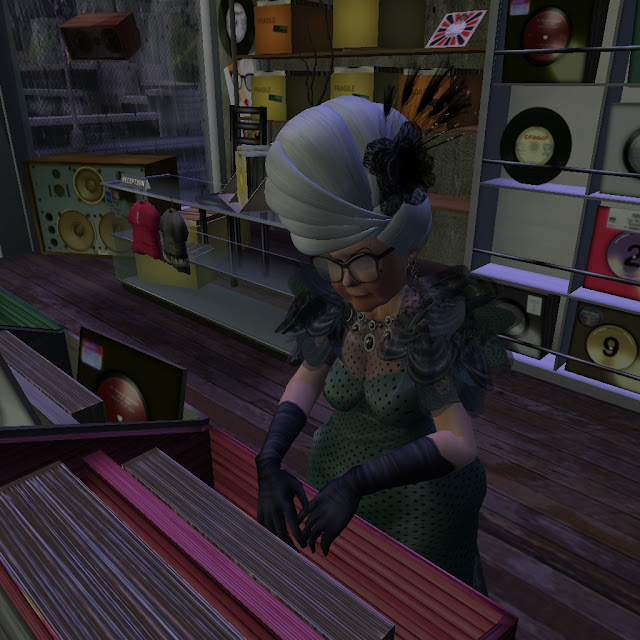 The shop was some sort of vinyl record shop and, noting Sammy Davis Jr. Jr.'s fondness for music, I decided to look around and see if he had taken refuge here. I didn't find him, but I did find a slew of original Barbra Streisand albums! As if my heart needed any more excitement! As I was thumbing through the bin, I heard a scratching noise behind me.
I whirled around and found the noise to be coming from on top of the wall display. Could my Sammy have climbed up the ladder to hide? It is possible, dear! His biscuits are in a cubby far over his head and they seem to disappear at a rate much quicker than I give them. Tosh, of course I don't eat them, darling! What a preposterous idea! Anyway, with the suspicion of his talent for climbing in mind, I scooched up the ladder and had a look. 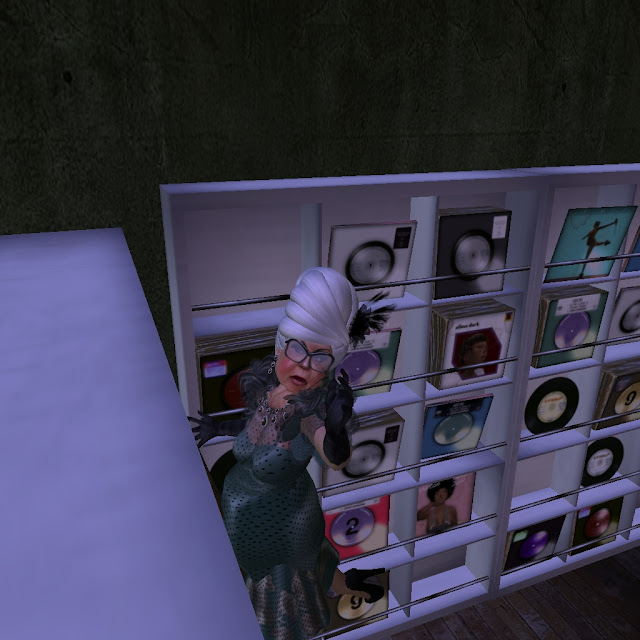 I admit, dearest, had I not survived the night, I would have believed that all fate was conspiring against me. Not only was Sammy missing, and a trove of original Barbra albums in a store with no visible storekeep, but what should I find on top of that wall display? Was it my beloved pooch? No! It was a rat! Oh my nerves - my poor, frazzled nerves. 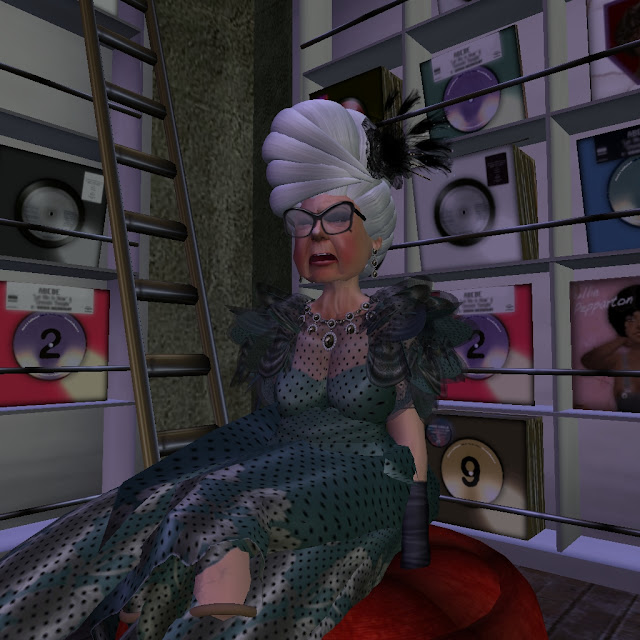 Once I got to the bottom of those stairs I sat right down and had a bit of a cry. Of course, part of me was hoping Sammy would see what a state he had put me in, feel guilty, and come out of hiding, but most of the cry was genuine! Oh yes, darling, I wanted to give up, but I couldn't! Sammy is my beloved companion, after all, and I couldn't just give up on finding him! So, after a few minutes, I picked myself up off the floor, dried my tears, and wiped myself off.

I was preparing my newspaper for once again entering the raging hurricane outside, when I heard a creak coming from upstairs. It could be Sammy! It could be a storekeep! It could be another rat! Of course I was frightened, but I was even more resolved! I had a pooch to find!

(To keep my already long story posts from being painfully longer, credit details are in the comment section below, or you can find credits to specific pictures on my Flickr Page! A directory of SLurls can be found here!)
Posted by Dame Edith Ogleby at 4:04 PM